While repairing Lola’s side structure, I had the opportunity to inspect the metal substructure (frame) where the sides connect to the metal “outrigger” supports.  The metal framing is fairly simple, two main longitudinal “C” channels and four transverse “L” angle supports.  The angle supports are welded to the “C” channels and extend out to side walls.  “Two-By” (2 x) lumber pieces are bolted and/or lag screwed to the angles and the wall fastened to the 2x’s.  Here’s an illustration of the frame generated from Lola’s 3D model.

Not surprisingly, after 60+ years of use, about half of the outriggers have some damage.  In most cases, the damage consists of flattened angles – normally 90°, now something like 170°.  The worst damage is to the angle behind the right wheel.  Were the angle is severely twisted and pulled forward about 3 inches – most likely from a blown tire.  Fortunately, all of the outriggers are still serviceable and attached to the 2 x’s.

There are several viable options to deal with the damaged outriggers – ranging from leaving as is (they are somewhat serviceable) to lifting the cabin off the frame and rebuilding.  Yes, it can be done – see Rod Wylies’ (Teachndad) incredible story at Andy the 57 Westerner.  However, I’m considering a middle of the road approach.  My idea is to ‘sister” in four new lateral members next to the four existing supports.  Instead of angles, I’ve tentatively selected 2″ x 1 1/2″ rectangular 14 gauge steel tubing (although Aluminum tubing is still an option).  I plan on bolting the new laterals to the “C” channels instead of welding.  Bolting will facilitate future repairs, if necessary.  Depending on the extent of each outriggers damage, I may selectively cut it off outside the “C” channel, leaving the welded portion between the “C” channels.. Here are a few illustrations: 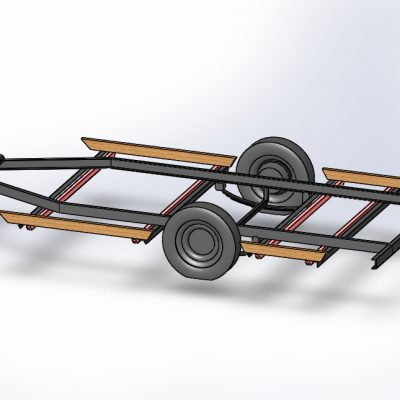 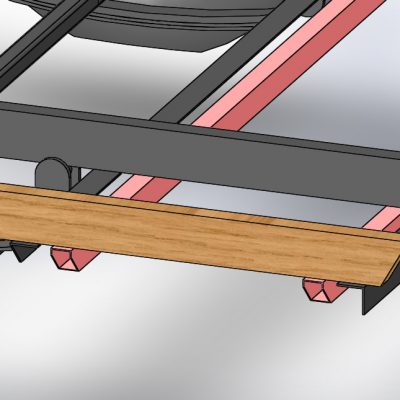 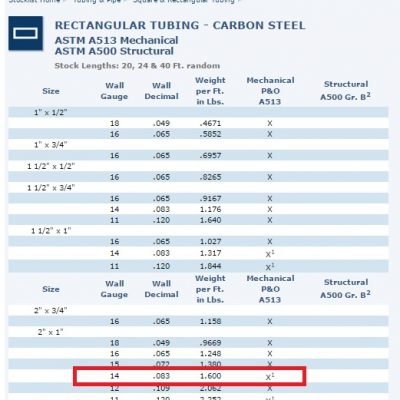 A question came up on the vintagetrailertalk forum about whether the screw holes would weaken the frame significantly.  So, for fun, I ran a Finite Element Analysis on a 6 ft “C” channel using the dimensions from the smallest / thinnest 3″ C Channel Reyerson lists.  I placed  3 sets of 1/4″ and 3/8″ holes along the channel and loaded it with 500 lb distributed along the channel.  One end was fixed and the channel constrained so that it could not twist.  This would be analogous to a 1,000 lb 12 foot beam supported in the center (like a teeter totter).  Here are the results: 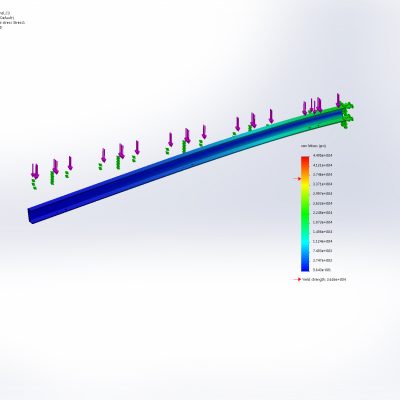 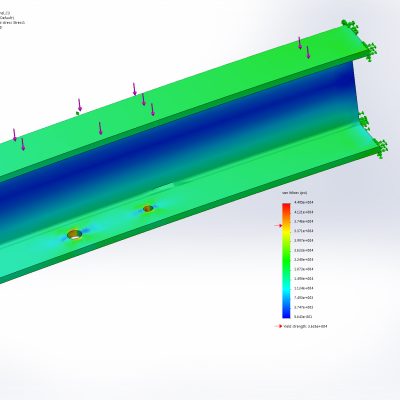 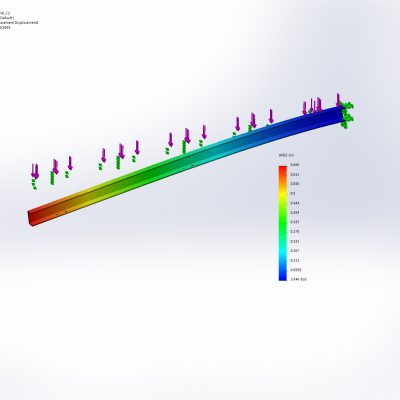 The important message is that the stress around the holes in the highest stress area is not significantly higher than in the surrounding region.  As shown in the middle picture, there is a little bit of localized stress at the hole edges which reach close to yield levels, but this would be relieved by localized yielding would not result in failure.  Note:  the displacements shown in the pictures are 10X actual.  The third picture shows that the end of the frame would flex by approximately 2/3″ if loaded as shown.

Please let me know what you think.